Most clubs hold one or more internal tournaments per season, so why not show event tables generated for you in your club page? This is easy to do as game results are already being entered into this site during the season so you just need to define/mark which results are to be included into each table. All club key-holders are able to define the table(s) your club requires and enter the game results on-line from their admin page (examples shown below). The tables will then appear in the competition section of your club page and players will see these tables automatically updated as soon as each set of game results are entered. You can define/change a table definition at any time, though initialising this before the start of the event allows players to follow progress and be reminded of rules throughout the event. Start by selecting a suitable table from your admin page and complete it’s definition. When game results are added tables will automatically populate so players can follow progress of the event.

First add a cross-table and define it’s properties by entering a table name, qualifying games, preferred default view, scoring system, description/comment, start/end dates. (‘players x rounds’ is best suited view where there are many more players than intended rounds, ‘players x players’ may best suit fewer or no defined rounds – but viewers can be toggle between these). The game points to be summed up in the table can be tailored to suit your purpose, the default being a standard (1-½-0). Perhaps to minimise the likelihood of ties, you may also choose from Bilbao (3-1-0) or entirely bespoke by supplying your own values for win/draw/loss as Black/White. (example admin screen shown below).
You can edit this table later if end-results require tie-break winner(s) to be marked, according to your criteria. 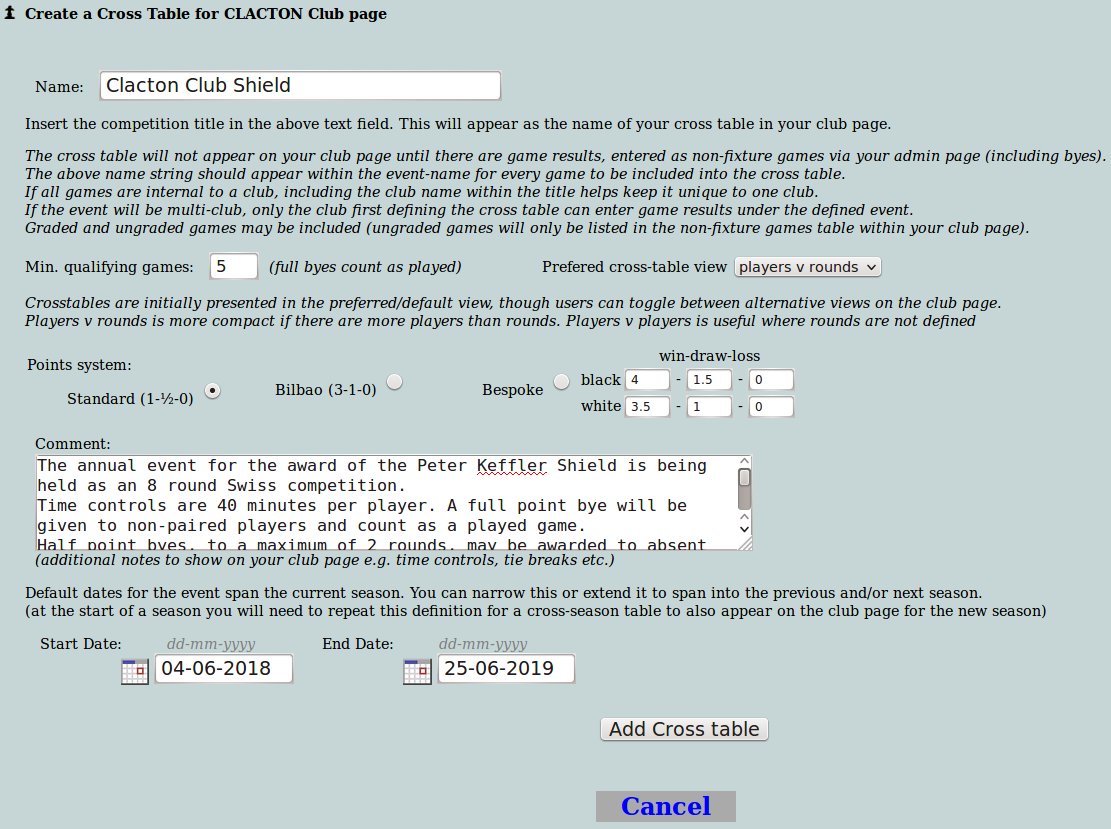 A table will be displayed in your club page when there are results to be included – these will be internal game results where the ‘cross table name’ (identifier string) is contained within the ‘game event name’.  If a minimum number of qualifying games was specified, the table data of players with sufficient games to qualify will appear in bold. Leaders will be highlighted with a green background in the selected ordering. Non-qualifying data is in italic/greyed. The example screen-shot below is taken from Clacton 2015/16.
The displayed table can be viewed ordered by points (default), performance, or by performance-minus-grade (by clicking on the appropriate column heading). :- 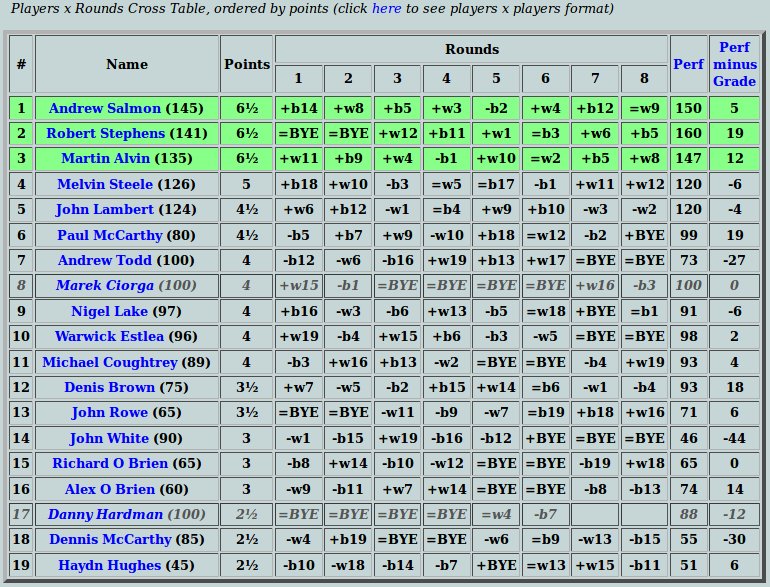 Cells may have more than one game result (for example where Black and White are played against the same opponent in the same ’round’) and are shown comma-separated within cells (so you don’t have to regard each ‘half round’ as a separate round). If you don’t want to name any rounds as such, the ‘player x rounds’ format will just show each players results under a single unnamed ’round’.

The initial format for the table will be according to the preferred view specified in your table definition, though viewers can flip the display between the alternative views by clicking the link above the table. The mid-season ‘player x player’ example screen-shot below was taken from Dunmow 2018/19 results.

You can create a link for use in emails or web page links with a URL of the form http://necl.org.uk/summarybyclub.php?year=2015&club=CLACTON#crosstable
to ensure the specific view where columns are to be players, the form will be
http://necl.org.uk/summarybyclub.php?club=DUNMOW&year=2018&cols=players#xtable
(edit the URL to suit your club/season, other examples here, here, here)

Knockout tables show pairings and results with winners of each round highlighted
(who then go into the next round). First define a knockout table from your admin page,

then enter a table name, optional tag and comments with dates for the period of the event.

Use the event name for games to be included when you later enter these game results,
or you can use a shorter name for the event when later entering results if that contains the ‘tag text-string’ where a tag is specified.

A table will be displayed in your club page when there are KO results to be included. You can define any number of KO events, using different names, such as a ‘Plate’ for players knocked out in a first round.
Example output shown below for Brentwood Club Championship. 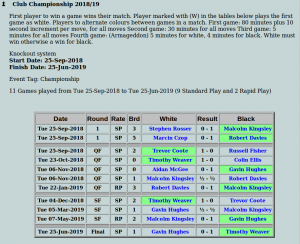 These are useful to show participation in club games/challenges taking place over a defined period within a season (possibly over the whole season), not necessarily structured into rounds and with few constraints. The 2012/2013 season saw incentives to influence non-match games in clubs away from being ‘mostly casual’ when funding changes meant most players became direct ECF members and entitled to have any number of club games graded at no extra cost.  e.g. A ‘ladder’ system was suggested at the 2012 Clacton AGM by Martin Alvin, to be based on all qualifying internal games throughout the season. A trophy was later organised to provide something extra to play for. The ladder was adapted from one of Martin’s previous clubs, who in turn adapted it from elsewhere so we do not know who should take original credit for this. Everyone starts on the same initial (e.g. 50) points and then acquire/loose points based on a scoring system which (as with ELO/ECF grades) adjusts the points for wins and losses based on the current points difference between players. You need to play a minimum number of games (e.g. 8, standard/rapid/any) to qualify for a placing but there is no limit on how few or how many games each person plays. This makes it very easy to run with typical ad hoc club attendances and no pairing requirements to organise! Initially done on a spreadsheet, tracking the scoring of players as game results were reported was susceptible to errors and the ripple effect on later games. Although Andrew and John kept separate copies and compared notes from time to time, adding in a previously omitted game still involved significant rework/re-sorting. Also, results were not very visible unless the spreadsheet was uploaded. As game results were already being entered on-line I suggested/programmed the web-server to do the arithmetic instead and was able to make this a generic facility so all league clubs can run similar ladders if they wish. Providing a trace facility also gave visibility to each stage of the calculation for the benefit of any players wishing to check details. The suggested rules are published here. You can view the Clacton club page for the 2012/13 and 2013/14 seasons to see early examples. Player names are ‘greyed’ until playing the minimum games for a place and any green row(s) in the table indicate the highest scoring qualifying player(s).

If ‘tag’ is blank all internal club game results within the ladder start and end dates are used to produce the table shown in your club page. Use a tag if you want to be more specific about selected games, where the ‘tag text string’ has to appear in the event name of the ladder game when entering a game result. Other/non-matching internal events (or overlapping ladders) will then be excluded from the named ladder.
Example taken from Clacton 2016/17 where the simple tag ‘ladder’ is used to ensure June club shield games are excluded from the ladder :- 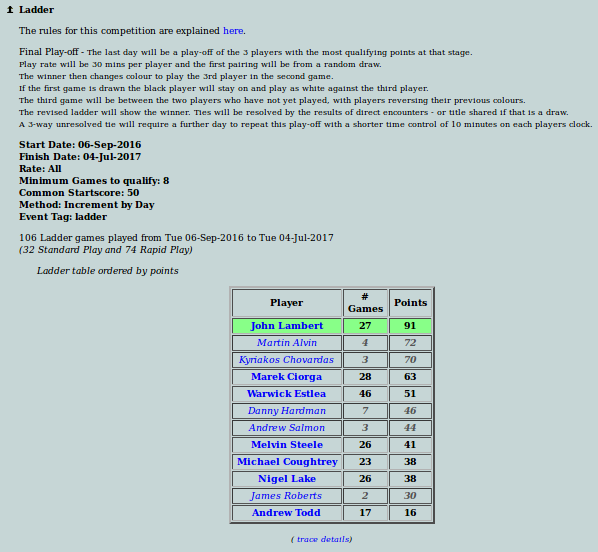 You can crate a link for email or web pages using a URL of the form
http://necl.org.uk/summarybyclub.php?year=2016&club=Clacton#ladder
(edit to your club/season)

If unsure about which calculation method to choose, “increment by day” is suggested.
“increment by game” – adjusts player scores after each game, so results need to be entered in strict playing order for games within the same day – or different end of day scores may result!
“increment by day” – adjusts player scores once for all gains/losses of that day.
Each days results can therefore be entered at any time and in any order.
e.g. scroll down an alongside comparison between the Clacton trace result for 2012/13 season which used the “increment by game” method, and the would-be trace result if “increment by day” had been used. Note the small end-of-day differences that grow to produce a different overall end-result/winner.

Notes on Data Entry
Event Name:  To ease event name entry in game results, that match the names of events where an associated table has been defined, click the Event Name field in the data entry page to bring up a pick list of events to select from (may need double click, might not work for all devices/browsers/settings)  – or, typing into this field may attempt to auto-complete to these. If you notice game results not being added to a relevant table, check for typos in this field to ensure it contains the defined event name, or the ‘tag-string-text’ if one is specified (matching is case insensitive).

Rounds: If an event has rounds (not applicable to ladders), the round entered must be consistent for all games of the same round. e.g. if round 2 of a knockout is a quarter-final, the program will not know this, so if some games are entered with a round of ‘2’ and others as ‘QF’ these will show as two separate rounds until you edit one or the other to show as the same name or number. If all rounds are entered as numeric, the displayed ordering of rounds in tables will be in numeric order, otherwise ordering will be by date of last game in each defined round.

Game Score: To show a BYE in a Cross Table or Knockout Table, select the player as white (though no colour will be allocated) and then select the opponent ‘BYE’ as black and choose a score that gives the player a half or full point.

Various ‘Plugins’ ( ‘ChessOnline‘, ‘Embed Chessboard‘ and ‘Chess Tempo Viewer‘) are installed to provide chess-graphics for your posts. These can show single game positions, or a whole game animated on one board.

1) One way to show a specific game position, either as part of an annotation for a game or to present a chess puzzle, is to simply insert your FEN text between square brackets as described here. The example below, uses the text string,
r2qk2r/ppp1bppp/3p4/4n2n/2B1P1b1/2NPBN2/PPP3PP/R2Q1RK1 !w !- !- !0 !1
The string has to be exactly right to be picked up by the ChessOnline plugin and show the board in your post. If you only see a text string instead of a diagram when you preview your post, double check that you have entered a valid string (and no spaces between bracket and string!).

N.B. ChessOnline seems to need the above ‘!’ characters to work. Another quirk,  depending on users window magnification, might cause the right-side row numbers to display ‘under’ the table instead of alongside. It has been 7 years since the last available update, so you may prefer to use an alternative viewer for new diagrams (and edit tags for existing diagrams?).

2) The Chess Tempo Viewer can also demonstrate a board position (or complete game) using ctpgn tags as described here and shown below for the same position.

To place an animated graphic of a full game into your post you have a choice of tools.
1)  You can insert the pgn text string for the game between pgn tags as described here and shown in the example below which uses the ‘Embed Chessboard’ plugin.
Your readers can single-step through the moves, or click the ‘+’ button for auto-play.

2) The ChessOnline tool has been extended to also deal with pgn.
It was described as experimental, but seemed workable, and is shown in the example below. (though presently lacking a few features such as initialising the display to a specific move and no autoplay). Similar to above but use copgn instead of pgn in your tags.(shown here for the same game).

3) Here is the Chess Tempo Viewer version of same game.

A further example shows how this viewer can be used to give a start position/study with follow-on moves and comments.